Trip at a Glance

EVEREST LUXURY TREK: Want to trek to Mt. Everest in a luxurious style? If you want it, grab your bag pack and get ready for it. Step On Himalaya brings you the amazing Everest Luxury Trek in the way you have dreamt of viewing Mt. Everest very close to you. Everest Luxury Trek gives an opportunity to endeavor the beauty of the highest peak in the world – Mt. Everest with grand comfort. This trek leads to the Everest region of Nepal and makes feel like this world is yours and you are the ruler of the kingdom. By the name also, Everest Luxury Trek, one can imagine about the relaxed and comfortable arrangements made during the trek. The trip is less tiresome as much part of the trek is designed in a comfy way. The trek offers the amazing scenic views of nature, the mountains, the woods and the rivers. One can feel the same as the other trips but in a more comfortable way.

The start of this Everest Luxury Trek is with a special Nepalese style welcome at one of the five-star hotels of Nepal as per the itinerary of Step On Himalaya. These hotels have beautiful interiors reflecting the Nepalese arts and cultures. Varieties of mouth – watering cuisines like Italian, Mexican, Spanish, Americano, Chinese, Korean, Nepalese, etc are served. There is a saying "hygienic food gives the cool mood, the taste of the foods available is simply awesome. These hotels provide a Royal class service. Some of the five-star hotels are Hyatt Regency, Hotel Solti, Hotel Radisson, Hotel Shangri-La, Hotel Dwarika, etc. The accommodations are done according to the request of the travelers. Step On Himalaya team does not compromise in the comfort level of the trekkers, As the team of Step On Himalaya believes "Comfy stay will boost up the mind and thence, will potentiate the strenuous jobs”. So we try our best to provide a higher level of comfort.

On the next morning of Everest Luxury Trek, Step On Himalaya representative will escort you for the trip that will begin from a scenic mountain flight to Lukla and then you will head to Phakding and then to Namche Bazaar – the central trade station of the Everest Region. Here, the Nepalese and Tibetan traders exchange stuffs like dried meats, salt, textiles and other food. Also there is the Sherpa Culture Museum which you will visit and wander around the villages to acknowledge the culture and traditions of the local residents there. Then you will walk to Tashinga and to Tengboche monastery – the spiritual hub. Then you will head to Mende and Thame villages. On the way, you will retreat ourselves with the majestic views of the Mt. Everest and adjoining mountain ranges. Finally, you will catch the scary but exciting mountain flight from Lukla to Kathmandu.

As this is the Everest Luxury trek, the accommodation will be in one of the best guesthouses or lodges on the Everest region as Everest Summit Lodge or Mountain Yeti home. You will view awesome sceneries of the mountains. This is the finest combo of the luxury you need and the nature you retreat yourself. Hence, it is designed in such way to provide you the fullest in the Everest Region. 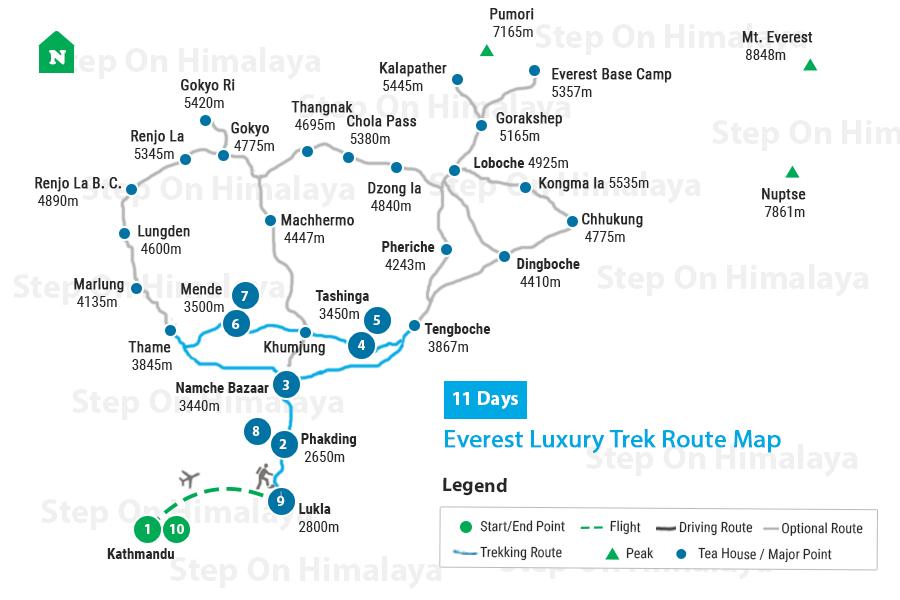 Everest Base Camp Trek is categorized as Moderate, Adventurous, and Challenging/Strenuous.

There are different types of packages for Everest Base Camp Trekking. Depending upon the trekking you choose, the duration varies from 12 days to 22 days.

It totally depends upon your fitness level. If you are able to walk 5 to 6 hours daily, you can attempt the Everest Base Camp trekking. The duration of the trekking also matters.

The temperature varies as per the season of the year. It also depends upon the alterations in the elevations. It is from 5° C to 20° C normally in the morning during the months of April to September. While from the month of October to March, the temperature might fall below a minimum of - 10° C to a maximum of 15° C during the day time. It is usually cold in the night time.

The higher you go, the more change in the climate. There are abrupt changes in the weather at the Base Camp on Everest.

The best season to trek to Everest Base Camp is Spring during the months of March to May. The post-monsoon fall (September to November) is also considered to be the better season while Winter(December, January, February) is colder and rain might halt the trek during Summer or Monsoon (June to August) season.

The shortest and most convenient route is via Lukla. But there are various routes to reach Everest Base Camp. The route via Jiri is the oldest one. Another route is from Arun valley in Eastern Nepal, from the Makalu area passing through 2 high passes, from Rolwaling crossing the Tashi Labtsa high pass, etc.

No, there isn’t any age bar or limit for trekking to Everest Base Camp. But it is always essential that the trekker be in good shape of fitness and possess an optimistic attitude.

A trekker has to walk a minimum of 5 to 8 hours daily.

Expand All Collaspe All

Arrival at Kathmandu at Tribhuwan International Airport, a representative from Step On Himalaya will welcome you taking to the hotel. On the way, briefing of the trek will be done. No planning of any activities on the day of arrival, hence to relax and stay overnight at the hotel.

An Awsome flight of about 30 – 35 minutes from the domestic airport at Kathmandu to Lukla airport. It has a runway of the length of about 60 meters and is located at a high altitude. You will then walk from till Phakding having scenic views of Kusum Kangraru. Overnight stay at Guesthouse including all meals.

Starting from Phakding, you will be heading to Namche Bazaar – a center of trade of Khumbu region. Namche Bazaar is well known for the trading of textiles, foods and many more. The fascinating view of Himalayan pine and cedar trees on both sides of the path following the Dudh Koshi is simply ravishing. After reaching Namche Bazaar, you will stay overnight at the Guesthouse, and enjoy all the meals provided.

On day 4, the trail passes through the mani stones, chortens around which pray flags are flying. You follow the trail traversing around the hillside above the Dudh Koshi River. It will take about 2.5 hours to reach Tashinga by following the classical approach route to Mt. Everest. Overnight at Guesthouse, Breakfast, Lunch, and Dinner included.

On this day, you will visit the Tengboche Monastery which is the spiritual hub of the Everest region. The environment is very magical and pious. The trail leading to Tengboche first descents to the small village of Phunki Tenga, just beside the Dudh Koshi, then you will cross a suspension bridge before climbing a steep ascent for about an hour. On the way, you can have rest beneath the shades of the rhododendron and alpine trees. After crossing the forest, you will walk about 1.5 hours all the way up to the Tengboche monastery, as the trail becomes gradual. After lunch, you will return to the Guesthouse and explores more of the monastery and its surroundings. Overnight at Guesthouse, Breakfast, Lunch, and Dinner included.

On day 6, you will visit the hidden valley of Khumjung village. The trail leads to the Khumjung, the education center of Khumbu region and then wanders around the Khumjung monastery and the Kunde hospital. You enjoy the day exploring the surrounding areas of Mende. From the lodge where you will stay overnight, have the spectacular views of the surrounding mountains like Kongde Ri, Thamserku, Kang Taiga, Kusum Kangru and Khumbila. Overnight stay, breakfast, lunch, and dinner included.

The trail today will begin passing via the village of Snow Leopard. You will wander around the Thame village and you can realize that the people and this amazing place still owe its originality, untouched by the modernization. This village is at the end of Khumbu Valley. On our return to Mende, you will visit to explore the impressive Karag Monastery near Thamo. Overnight at the Guesthouse, Breakfast, Lunch, and Dinner included.

The trail will descend to the Namche Bazaar and finally to Phakding. On the way, you can view amazing snow covered Himalayan ranges walking through the forests of rhododendron and pine. Overnight at Guesthouse, Breakfast, Lunch, and Dinner included.

The following day, you will continue the trek along the Dudh Koshi River to the small mountain airstrip at Lukla. Overnight at guesthouse, breakfast, lunch, and dinner included.

30 – 35 minutes scenic flight back to Kathmandu. Step On Himalaya representative will take you to the hotel. Overnight at Hotel, Breakfast Included.

The representative of Step On Himalaya will arrange a private vehicle to reach the airport approximately 3 hours before the scheduled flight.

What is not included? 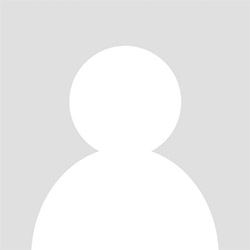 To choose Step on Himalaya was the correct decision. Truly this is one of the best treks I have ever opted for. The guide, Hari was very friendly and caring. The trek was managed superbly. Just full of fun and relaxing. We never felt any kind of uneasiness or trouble during the whole trek. We just kept on enjoying it from the start till the end of Everest Base Camp Trek. Choose Step on Himalaya and be tension-free for the trek.

Step on Himalaya Team organized our trek unexpectedly lavishing. We enjoyed the true meaning of Everest Luxury Trek. It was really very very fun and relaxing at the lap of Everest, dream was made true by SOH team and guide Hari. He is a friendly and very caring chap. Everybody likes his company. Highly recommended and our next visit to Nepal for sure to be managed by Step on Himalaya! Be ready Hari.

Why Travel With Us?