Ghode Jatra has a simple meaning of “Parade of horses”. In Nepal, there is a tradition followed by trained horse riders and acrobats who are army men and policemen to parade the horses and demonstrate different kinds of activities done by the horses in the main ground of the city, i.e. Tundikhel of Kathmandu. It usually falls on the Chaitra (March or April in English calendar). On this day, there is a mass gathering of people to see the Ghode Jatra which is really spectacular to watch. It is worthy enough to spend a day observing and enjoying the Ghode Jatra Festival. It is declared a holiday in the capital city, Kathmandu on this day.

Ghode Jatra, this traditional parade of horses is being followed since ages. The Newar communities of Kathmandu celebrate this festival as the meeting fest of all Gods. The celebration continues for several days. They worship gods like Lumadi, Bhairava, Bhadrakali, Kankeshwari, etc. and build portable chariots which are brought to the Ason chowk of Kathmandu valley during the day and the finally prospered at Tundikhel. It is also celebrated in Patan and Balkumari of Valley. In the Newari community, it is believed that this festival is celebrated to create some joyous moment. A horse is given alcoholic spirits until it is intoxicated. A drunken person who wears a Newari dress rides the horse. Now, the gathered crowd starts making noises in order to frighten the horse and it can run wildly. It depends on the rider how well he can tackle the horse in such a noisy, chaotic environment. This demonstrates the ancient culture and tradition of the Kathmandu valley with wide historical and cultural background.

There are many stories or beliefs connected to Ghode Jatra festival. In the history of Kathmandu valley, the Kings of Kathmandu worship the Bhadrakali goddess in the temple nearby Tundikhel. A courteous procession is carried in respect of the Living Goddess Kumari. Hence, this procession got modified into the Ghode Jatra with the parade of horses. Whatever the myths and beliefs exist, the Ghode Jatra Festival is now an entertaining activity where the horse riders and acrobats demonstrate their skills with the horses and compete for the rewards too. Its popularity has attracted many tourists to Nepal. These demonstration activities during Ghode Jatra festival have been now competitive sports and now become a type of Military pageant. 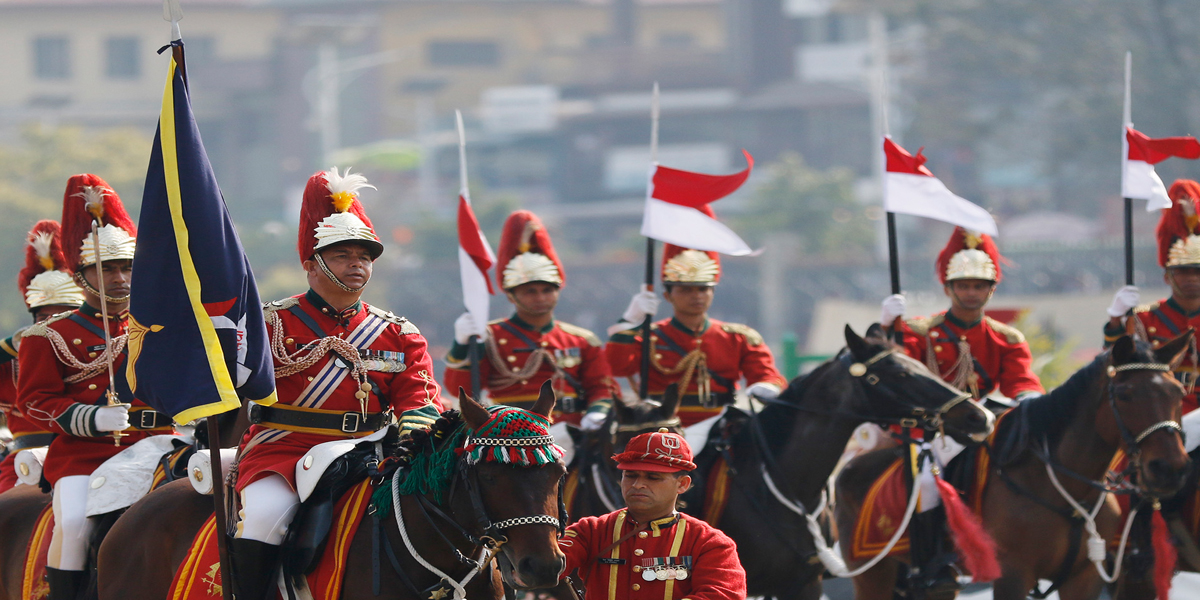 Gurumpa demon story is linked with a trader of Kutumbahal, named Kesh Chandra. He was a clever business man who has a talent of thinking capacity for trade. But he had a habit of gambling. Daily gambling made him lost everything that he possessed. This made him go to his sister as she was married to a rich person. Kesh Chandra’s sister was so glad when he visited her. She prepared delicious foods and served him in a golden dish. Out of jealousy, after finishing food he stole the plate. Taking leave with his sister, he went to gamble again with that golden dish but his bad luck, he lost everything.

Once again, Kesh Chandra was penniless. So he decided to go back to his sister once more forgetting whatever happened with the golden dish. His sister forgave Kesh Chandra and served delicious verities of food items in Silver plate. But his greed made him steal the silver plate and the story repeated. Gambling and then losing again. Days passed and he couldn’t even afford food. He was too hungry that he shamelessly revisited his sister and begged forgiveness. His sister agreed to offer him food despite her anger but instead of serving the food in the platter, she dropped the food on the ground and told: “This should teach you a lesson”.

He returned with full remorse but he collected the rice and kept in a cloth. He went off from his sister’s home. On the way to Swayambhunath, he decided to rest for a while under the shade of a Banyan tree as he was exhausted and fatigued with hunger. He fell asleep due to comforting shade and breeze. When he woke up, the rice was finished. The pigeons on the Banyan Tree flew down and pecked the bundle, rice popped out and the pigeons finished the rice within a minute. As the gratitude, the pigeons dropped golden eggs for Kesh Chandra. It was a rain of golden eggs. With this turning point of luck, he was very happy. He collected all the golden eggs but it was difficult to carry along with him. He tried a lot to carry all the golden eggs but no matter he failed. He then saw a giant demon approaching towards him. That demon was Gurumpa. When Gurumpa saw Kesh Chandra, he said: “Finally, I got my meal for the day”. As Kesh Chandra had a quick talent of thinking, he got an idea instead of running away. As he knew if he ran, the demon would catch him in a second. He told Gurumpa that eating him would not be enough for him. So he offered him a whole single buffalo with three big bundles of rice to the demon. As a guarantee, he would keep those golden eggs and returned only if he got satisfied.

Gurumpa thought it was a good idea so he agreed to take the offer and he carried the bundle of golden eggs and followed Kesh Chandra to his home. After he was satisfied with the meal offered, he returned the bundle of golden eggs to Kesh Chandra. Kesh Chandra thought that Gurumpa would return to the jungles of Kathmandu but the opposite happened. After some hours, Gurumpa told he would take rest in the lawn. He slept there for 3 days and 3 nights. On the fourth day, he woke up and asked for more offerings. Fearing for life, Kesh Chandra offered and told: “please fulfill your hunger and rest till your heart’s content”.  This cycle of offering continued.

The neighbors started noticing the unwanted guest of Kesh Chandra and told him to get rid of Gurumpa or else the end would be disastrous. So one day, he told Gurumpa “there is a new home for you” and took him to Tundikhel telling the shade of the Ficus tree is his new place to rest. He would bring meals regularly for him. Promising this, Kesh Chandra returned his village. He thought everything was sorted out. But when Gurumpa woke up on the fourth day, he saw no food was there. He waited but still, nobody came. So he went to Kesh Chandra’s house and dragged him out of his home and then after that day, nobody saw Kesh Chandra.

After this day, Gurumpa would visit the village now and then and terrorized the villagers. One day, the people of Kathmandu decided to kill Gurumpa so they gathered and formed a mob. They took all the weapons available and went to Tundikhel to bring him down. But the trial was unsuccessful. In the end, the people let the horses on the top of demon Gurumpa. He was then stamped and crushed by the foot of horses. This was the end of demon Gurumpa. Still, in fear, the people of Kathmandu released the horses in Tundikhel thinking that Gurupma might come back to terror them. Hence then, this became a ritual and now finally known as Ghode Jatra.

On this day, there is a parade of horses in Tundikhel. The president, the prime minister, other ministers, and political leaders, army and police officers, foreign representatives and other delegates stay in the pavilion in the Tundikhel to watch the show. Many spectators stand by the fence to enjoy the show of the horses.

Nowadays, Patan started to celebrate the Ghode Jatra in their own way. They will let a horse drinking an ample amount of alcohol and will leave the horse and try their best to scare the animal so that the horse will run wildly around. The stamping sounds and clamor of the galloping horses boost the theme of Ghode Jatra.

It is very enjoyable to watch the Ghode Jatra in Tundikhel. Hence, we advise our guests to visit Nepal during this festival month so that they would get the chance to enjoy the parade of horses. Step On Himalaya appeals to his clients not to miss this chance of celebrating Ghode Jatra.