Trip at a Glance

Upper Mustang Trek is the heaven of the world which is being considered as the hidden world of the Buddhist kingdom of Mustang. It is also known as “Lo” which used to be the part of the Tibet. That’s why; the culture and traditions are very much similar to Tibet.  This region was forbidden for trekking and it was officially opened only about 15 years back in 1992. Even though the trekking is open for trekkers, there is some part of Upper Mustang which is still restricted for trekking. The trekkers require special trekking permit and should accompany an officer who is appointed by the government. Upper Mustang trek lies in the rain shadow, mainly in the northern part of Annapurna and Dhaulagiri ranges. This region is completely protected from the monsoon downfall. It is better to travel here during the monsoon season as the local people will be busy with their work.

The Upper Mustang is also popularly known as the “Forbidden Kingdom” which is full of eroded canyons, parched valleys and yak caravans. The trail of Upper Mustang trek will let us enjoy the barren landscapes filled with the chortens full of colorful prayer flags, white washed-houses, and fields of barley. Ponies are available for transports which are hired. We can see the Dhaulagiri and Annapurna massifs en route to the Upper Mustang and Lo-Manthang. Lo-Manthang is the oldest capital of Mustang, where the palace of the last kind is still there. There is a Lo Gekar Monastery which was built during the Eighth century by the Tibetan magician Guru Rimpoche. There is a story that Dhakmar was painted red by the blood of a powerful demon that was killed by Guru Rimpoche. We can visit the Amchi museum and the Amchi School. The Amchi is an official Tibetan doctor of the king.

Upper Mustang Trek is usually accessible from a flight from Pokhara to Jomson. The flight will fly over the deepest gorge in the Kali Gandaki that runs between the Nilgiri and the Dhaulagiri mountains. Kagbeni is another attraction of Upper Mustang. There are several teahouses for accommodations where authentic Nepalese foods and International cuisine are available. There is a seasonal migration during November as many local inhabitants move from Lo-Manthang and surrounding regions towards the lower altitudes for winter months. This might cause inconvenience in the food and accommodation facilities. Since Upper Mustang Trekking is considered to be a moderate type, the trekkers should be able to walk for about at least 5 – 6 hours daily. The other adventurous activities are mountain biking, village tours, trekking, and explore the Tibetan cultures with amazing food and culinary. Step On Himalaya will always be ready to serve the valued guests with the utmost facility and services. Any change in the itinerary is acceptable. 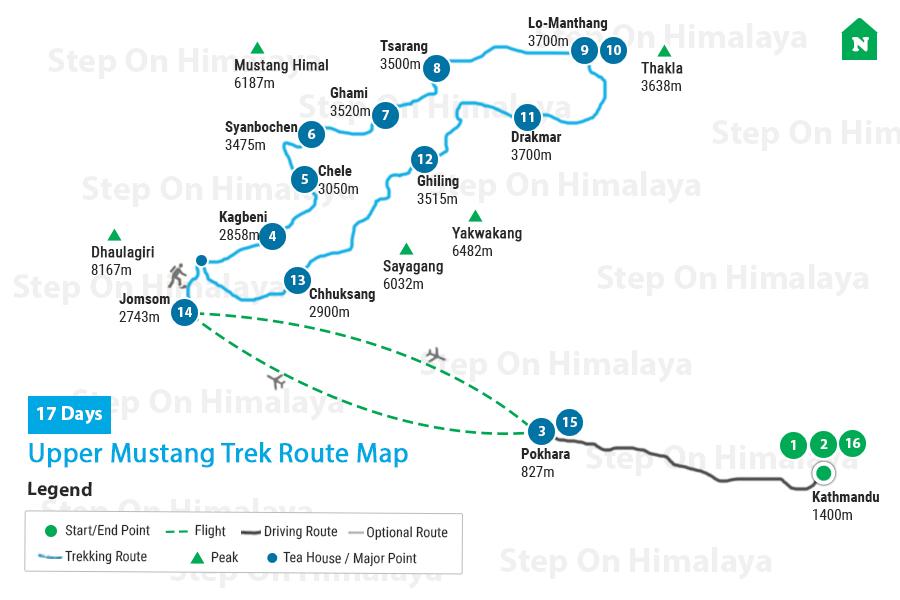 Day 16: Day 16: Drive from Pokhara to Kathmandu via Tourist bus

You will arrive at Tribhuwan International Airport and then a representative from Step On Himalaya will be waiting for welcoming you and will drop you at the hotel. You can rest and relax in the hotel. In the evening, there will be a welcome dinner arranged by Step On Himalaya.  Overnight in Kathmandu.

After having breakfast, we will be ready for the tour around the Kathmandu valley for sightseeing of mainly the UNESCO listed World Heritage Sites which are Pashupatinath temple, Swayambhunath Stupa, Boudhanath Stupa and Kathmandu Durbar Square.  The tour will be guided by one of our experienced, English speaking Tourist Guide.

We will have an early morning flight from Pokhara to Jomson. After reaching Jomson, we will walk towardsKagbeni. Jomson is mainly famous for the apples. We will walk through Eklibatti village which is situated at the bank of 2 rivers.  There are flat-roofed houses and an old Fortress. Overnight at Kagbeni. 3 meals included

We will walk for about 5 – 6 hours from Kagbeni to reach Chele. We will have to get the permits checked and start our trek following the Trail of Kali Gandaki River. We will then ascend on the hill and reach the Tangbe village. There are usually strong winds in this region. We will pass through the buckwheat and barley fields, narrow alleyways, apple orchards and small white-washed houses. Continuing the trail, we will cross a river and a village and finally reach Chele village. Overnight here with 3 meals included.

From Chele onwards, the trek will be little hard as compared to earlier walks. It’s because we will be passing through Taklam La pass and Dajori La pass. We can enjoy the scenic views of Tilicho, Damodar danda, Yakawa  Kang and Ramchung Cave. We will reach Samar village after descending further. We will still keep on walking through the village and reach Syanbochen after descending towards a steep trail. Overnight at Syanbochen with 3 meals included.

Today’s destination is Ghami. We will climb up to the Yamda La pass at an elevation of 3,850m. On the way, we will pass by teahouses, chortens with colorful prayer flags, gorgeous hamlets with amazing barley fileds and dense forests. We will then reach Nyi Pass and after descending, we will reach Ghami. Overnight stay in Ghami with 3 meals included.

We will begin our trek from Ghami descending through the slippery trail. After walking for some hours, we will cross a suspension bridge over Ghami river and continue the trail ascends. On the way, there are Mani walls. Then we will cross the Tsarang La Pass and reach the Tsarang village that lies above the Charang chu canyon. There is a huge fortress and at its eastern part, there is a red Gomba. Overnight stay at Tsarang with 3 meals included.

After having breakfast, from Tsarang, we will descend towards the canyon. We will then cross a river and begin the uphill trek to reach Lo La pass at an elevation of 3950m. We can view the gorgeous hamlet of Lo Manthang. We will descend to the Lo-Manthang village. The views of the surrounding Himalayas like Tilicho, Annapurna I, Nilgiri, Bhrikuti peak along with Damodar Kunda is awesome. Overnight stay at Lo-Manthang village with 3 meals included.

Another day of the trek especially for Acclimatization at Lo-Manthang. Acclimatization is an essential step for planning the further trekking accordingly. This will not only let us know the weather but also prevents us from being ill of acute mountain sickness. The day will be passed easily roaming around the Lo-Manthang village, exploring the nearby gompas which were restored by experts. The 3 main gompas are Jhampa, Chhoeda and Thupchen. We can hike to Tingkhar village located at the north-western part of Lo-Manthang. Another night stay at Lo-Manthang with 3 meals included.

Our destination is to reach Drakmar today. We will trek from Lo-Manthang after having breakfast. The trail will pass through the Gaykar village. Here is famous Ghar Gompa which is supposed to be a century old. It is believed by the locals that any wishes made here get fulfilled. We will continue walking until we reach Drakmar. Overnight stay with 3 meals included.

It is very windy during the daytime so we will start the trek early morning. We will then walk through the dry plateau and the fields. Walking through the trail, we will reach Ghiling which is usually dry. It will be a little difficult trek as the winds will blow onto our faces while walking but still enjoyable as we can see the mountains of Dhaulagiri and Nilgiri. We can either rest or roam around Ghiling. Overnight stay with 3 meals included.

On this day, we will reach Chhuksang after walking for about 5 – 6 hours from Ghiling. We will pass small beautiful villages and can view the majestic Himalayas en route. Overnight stay at Chhuksang with 3 meals included.

From Chhuksang, we will walk and join the trails of the famous Annapurna circuit. We will stop by at Kagbeni for lunch and then again continue our trekking until we reach Jomson to stay overnight with 3 meals included.

Day 15: Flight from Jomson to Pokhara

An early morning flight from Jomson to Pokhara. After reaching Pokhara, you can wander around the city or rest at the hotel.

Day 16: Drive from Pokhara to Kathmandu via Tourist bus

On the last day, the representative of Step On Himalaya will escort you to the Tribhuvan International Airport at least 3 hours prior to the scheduled time. Breakfast included.

What is not included?

Why Travel With Us?