Out of several festivals celebrated in Nepal, Janai Purnima/Raksha Bandhan has its own uniqueness. This festival falls in the Shrawan Shukla Purnima day. Janai Purnima/Raksha Bandhan is the festival of all the Hindu and Buddhist followers in the world.  On this auspicious day, the temples and the stupas are crowded. There are some processions and fairs “Mela” in different parts of Nepal especially in the Pashupatinath temple, Kumbheshwor Mahadev temple of Bhaktapur, Gosainkunda of Rasuwa, Gangasagar and Dhanushsagar of Janakpur, Dudhkunda of Solukhumbu, Halesi Mahadev of Khotang, Daansaadhu ofJumla, Nagarkot, and many other temples of Lord Shiva.

Janai means a cotton thread that is worn across the chest by the male only. It is initially worn conducting a ceremony “Bratabandha” which is followed in every caste in its own manners. It symbolizes the transition of a boy into manhood and should be worn every day. This is usually handover by a priest who is a Brahmin and follows the Vedic religions. The female members wear in the wrist calling it as “DORO”.

This Janai is prepared using the raw thread making 6 complete circles which are divided into 2 groups with 3 circles of thread in each. It is believed that Lord Shiva, Lord Brahma and Lord Vishnu reside in the 3 circles of one group and the Karma (deeds), the Upasana (prayers or worshipping) and the Gyan (knowledge) embody the 3 circles of next group. This Janai (sacred thread) is changed if it gets untidy or dishonored because of any forbidden acts. However, it is always changed on this Janai Purnima day humming the mantras and performing some rituals. 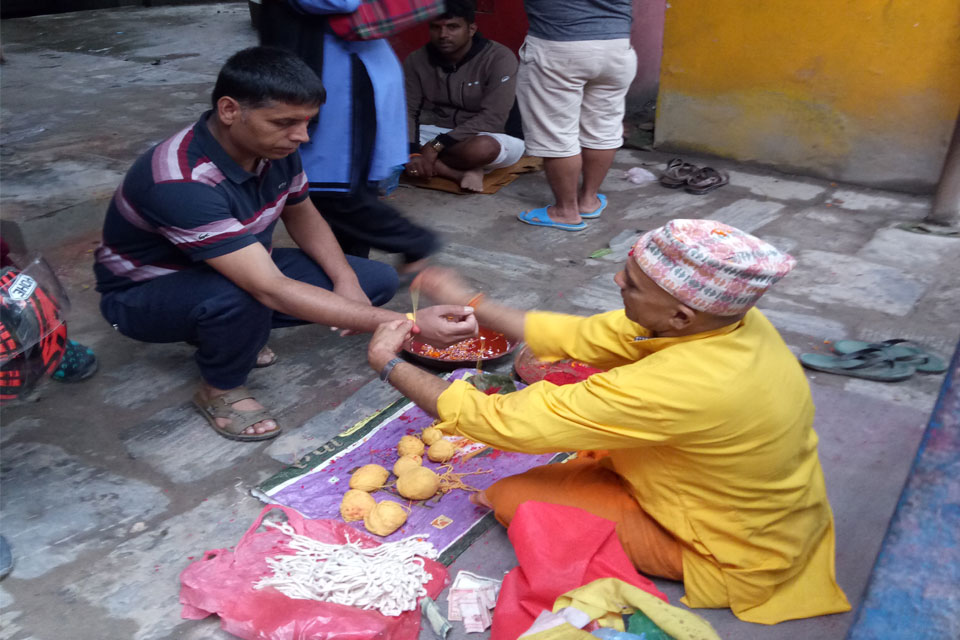 Likewise, Raksha Bandhan represents the holy thread that creates a strong bond between brothers and sisters. It is the bond of lifelong obligation/promise for protecting the sisters from any harm. Nowadays there are many colors and designs of Raakhi which are available in every shop. Brothers present gifts to the sisters. This Doro or Raakhi is taken out on the Laxmi Puja day of Deepawali / Tihar and tied on the tail of the cow. It is believed that the cow helps to cross the river “Baitarni” after the death to reach Heaven; hence the thread is tied to the tail of the cow.

A large number of pilgrims including Shamans, priests visit Gosainkunda lake of Rasuwa and many other sacred places of Nepal. There is a faith that one who dips in the lake of Gosainkunda on this Janai Purnima day, their sins are washed away, their ailments go away and get blessings of Lord Shiva. Irrespective of caste and creed, this day is celebrated by all the people in their own styles. Some do fasting, some prepare different types of dishes, some do prayers the whole day and some visit the temples and the stupas.

There is another interesting part of this day is making “Kwati”. This food item is specially prepared on this day which is always the mixture of 9 different kinds of sprouted beans. The beans are soaked for two days and so that they will sprout. There are different ways to cook it; either by making curry with gravy or fried or mix with meat. The people consider if Kwati is taken on this propitious day of Janai Purnima, the disorders of the Digestive system are relieved. With all the beliefs and happiness, this day is celebrated worldwide either you are with or without family.